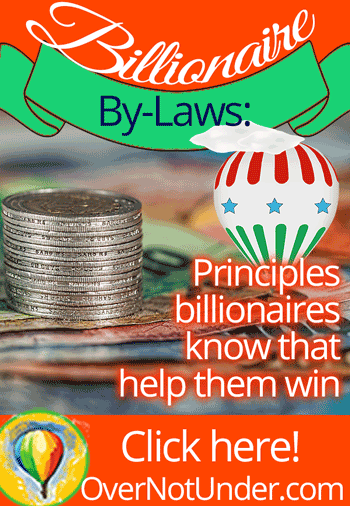 It was early in the morning, and I had been praying, studying, and reading. My study topic that week was what God says about money. Suddenly, in the stillness the Lord whispered into my spirit: “Find five Christian billionaires to learn from.”

My spirit leaped at the thought, because …

You will become like the people you learn from.

It’s a principle that works every time:

So when God told me to find 5 Christian billionaires to learn from, I knew He had something in mind that would bless me.

Obviously, billionaires must know something about money, business, and work that the rest of us don’t know. So I knew I was supposed to examine these people’s lives and find out what they know.

I also knew that I would need to study these people’s habits through a very cautious, Scriptural lens.

Just because someone gets one thing right doesn’t mean everything they do is a model of virtue. We need to learn from people who are better at something than we are. However, that doesn’t release us from the obligation to pass everything we see through the tests of Scripture, in order to determine right from wrong.

Therefore, I will carefully examine the principles to which these billionaires adhere(d). Then, I will eat the “meat”–but spit out the “bones.”

So here are the Christian billionaires whose habits I am studying:

Again, I may add others over time.

So the first Billionaire By-Law I have learned is from David Green, founder of the Hobby Lobby chain of retail stores.

I watched some videos by Mr. Green recently (found on RightNow Media), and I was incredibly impressed with what this man and his family members said. The prevailing message they were discussing was this:

They are acutely aware that God owns it all.

The Green family has a very hands-off approach to their fortune. They believe they are only managing it for God, based on His instructions, and for His glory.

They believe that God owns their business SO strongly that they actually had legal papers drawn up to give ownership of their entire Hobby Lobby business to God. Legally and formally.

In these videos, Mr. Green said that they actually had to have 3 generations of family members sign legal papers renouncing all claim to the Hobby Lobby business and fortune. That was the only way their attorneys would draw up the papers to transfer ownership of the company to God!

Can you imagine being SO aware of the fact that God owns your business, that you actually have legal papers enacted so there would never be any doubt? I was floored by that.

What does this Billionaire By-Law mean to you and to me?

God entrusted the Green family with a really big amount of money to steward. God did not call you and me to help steward it, so we must have something to learn from what they do! And what I see for myself, right away, is:

I have not been nearly as acutely aware of God’s ownership as the Greens are.

As I wrote about recently in Do You Need to Plea Bargain with God?, if I were constantly aware of that fact, I’d never leave a Taco Bell bag in the car. I would make sure the floors in my house were vacuumed and swept at all times. And I wouldn’t leave things sitting around.

If I really were aware of how God owns all the stuff around me, I would take much better care of it.

It’s not that I didn’t know God owns everything. I did. But it’s the acute awareness of this fact that changes our behavior.

So I’m trying to meditate on this truth–that God owns everything around me–as I walk through my day.

Those dirty dishes in the kitchen? God owns them. I’d better put them in the dishwasher.

Those dirty clothes in a pile on the floor? I need to hurry up and get those in the washer, rather than letting them wait for days. They’re God’s!

That drink bottle in the car? It’s empty. I need to dispose of it properly, not leave it sitting in the car. That car is God’s, and I ought not to junk it up.

Staying acutely aware of God’s ownership is a different way to think.

But, after all, isn’t that what we’re supposed to do? Isn’t that the point–to take every thought captive to the obedience of Christ?

So I’m going to keep trying. After all, the commandments God has given us–even the ones about meditating on Him constantly–are not too hard.

What about you? Are you acutely aware that God owns everything around you?

I don’t just mean “Do you know it?”; I mean, “Are you urgently and acutely aware of it, every moment of every day?”

If not, are you willing to start taking every thought captive to the obedience of Christ with me?

It’s God’s Word. These Christian billionaires obey it. Maybe that’s one reason God has entrusted more to them to manage than He has me.

I think I have something to learn. Don’t you?

What is God saying to you about managing His stuff? Are you constantly aware that you’re working unto the Lord? Leave your thoughts in the comments below!

Previous Post: « Do You Need To Plea Bargain with God?
Next Post: 3 Ways to Gain Life-Changing Motivation »