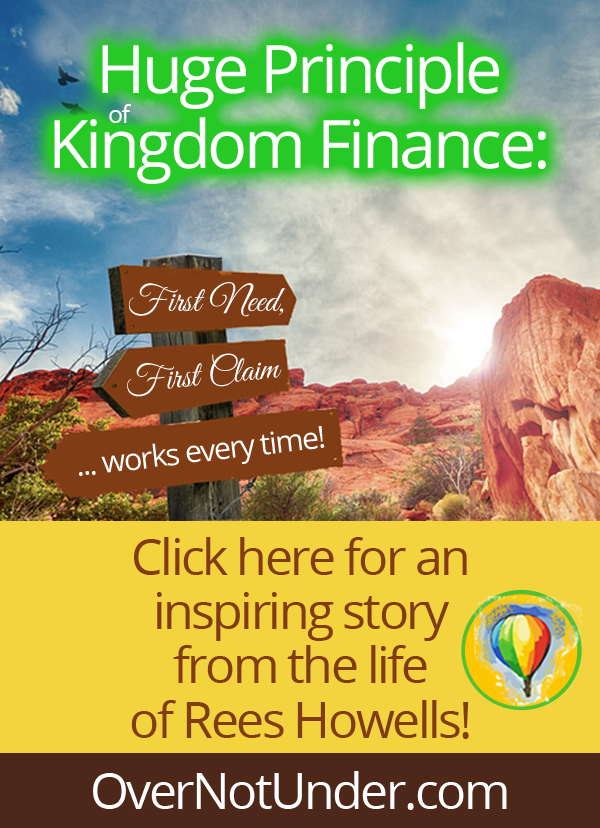 Do you struggle with knowing how to balance paying your bills with giving? Do you want to step into God’s river of abundance? If so, today’s blog post is an encouraging word for you!

God’s Kingdom is a river of abundance.

He is an abundant God who lacks for nothing, and it is His will for His children to lack for nothing as well. God’s Word says this throughout its pages.

However, most of us are not there yet. We’re not flowing in that river … or if we are, it’s not all the time–and not as much as we should be. (I know I’m not where I want to be, anyway, and I’m just going to assume that most of our readers aren’t either.)

By learning God’s ways and knowing His heart.

Many years ago, I learned a Kingdom finance principle from the life of Rees Howells. This lesson has stood me in good stead all these years, and it works. I want to share it with you today, for I believe it will help you too.

If you’re not familiar with the life of Rees Howells, you can read all about him in Norman Grubb’s book Rees Howells, Intercessor.

Basically, Rees Howells was a Spirit-filled intercessor and missionary in the first decades of the 20th century. He was a missionary to Africa, and he also founded a Bible college in Wales. He and his Bible college students prayed the Allies through World War II.

Grubb’s biography of Howells is, in my opinion, an absolute must for every person who wants to become powerful in God, learning to shake heaven and earth.

What does this principle of Kingdom finance mean?

Here’s how it looked in practical life:

Rees Howells worked a secular job for some parts of his life, but he also spent time in full-time ministry. Early on, he learned that he was dependent on God for provision (as we all are).

So sometimes, Howells would have plans, but the Lord would interrupt him … particularly regarding his plans for his (God’s) money.

For example, Howells would be walking from his house to the train depot, money in his pocket for a ticket to a gathering of preachers in a distant town. On the way, however, Howells would encounter someone in need: a widow, a child, a hungry man, etc.

When he did, God taught him that he was to use the money in his pocket–money he had saved for the train ticket he was to purchase a few minutes later–and help the needy person. It wasn’t easy, but Howells learned to obey. He would take whatever money he had and meet the need the Lord was leading him to meet.

However, that didn’t negate Howells’ need. He still had plans and needed to get to wherever he was going.

So, in faith, knowing that God had told him to go to that preachers’ meeting in that other town, Howells would walk on down to the train station like he was supposed to. Once there, he would wait.

Essentially, he was putting a demand on God to provide. He had had the money he needed; God told him to do something with it; he obeyed. But he knew God had also told him to go to the other town, so that meant that God’s river of provision would show up somehow and get him there.

And invariably, God came through.

Sometimes Howells would feel led to check his mail–and there would be a letter for him containing just the amount of money he needed.

Or, sometimes, someone else would find him and tell him that God had just put it on their heart to give him money–and hand him exactly what he needed.

Whatever the method, it always worked. Howells, acknowledging that the money in his pocket belonged to God, would do with it whatever God said … and he never lacked.

In this way, God taught Howells that the first person who needed the money God had sent him had the first claim to it.

The lesson of “first need, first claim” put Howells in an uncomfortable situation a number of times. After all, there’s much more peace of mind for our natural selves when we know that the money we need is in our pockets. Having everything we need in advance means we don’t ever have to use faith.

Oh, sometimes He does. Sometimes He’ll provide your need wayyyyy in advance. I love those times! Don’t you? When you don’t even have to give your need a second thought, or a second prayer?

My husband and I have learned to live by the principle of “first need, first claim” in our daily lives and ministry.

And, to be very real, it actually gets fun after awhile.

Here’s the thing: God may send any number of situations our way, asking us to give. However, we have never gone without when our need showed up.

It works the same way with this ministry (From His Presence, Inc., our 501(c)(3) organization that owns this website). We may have plenty of ministry funds in hand from a great product launch, a large donation, or whatever. We love it when that happens! It’s fun, and it’s a huge relief from the stress of running a business.

But, almost every time that happens, along comes God.

He’ll put us in a place where we hear about someone’s need, and He’ll tell us to meet that need.

When He does, our thought process goes something like this:

“God, we have the money. But we need it to pay our email bill / hosting fee / payroll / virtual assistant etc. this month. Those things aren’t going to get paid if we don’t have X amount.”

And God looks at us with a big grin, raises His eyebrows, and smirks, as if He’s saying, “So what? That’s then and this is now. You need that money 10 days from now, but they need it today. You have the money and they need the money. That money came from Me, and there’s plenty more where that came from. Give it to them.”

It takes faith … a lot of faith.

I, at least, have not always had the faith that it will work out without problems. When the Lord first started teaching me about this, I obeyed but then was really, really worried afterward.

But faith can start small and grow. Even if you don’t have enough faith yet to see the way the whole thing will turn out in the Spirit, if you have enough faith to believe God and obey Him, you can trust Him: it will work out.

Even though we practice “first need, first claim,” we have never, ever, ever gone without.

Every time God asks us to give–first need, first claim, right?–He comes up afterward, just in the nick of time, and provides the need we thought we were keeping that money for.

After we have seen Him do this a huge number of times, it has gotten easier. So much so that I now believe we have tapped into a secret about His heart. A river of abundance, because all our needs are met even if we don’t see big balances in our bank accounts all the time.

If you are willing to BE a river, God’s river will flow through you.

And when it does, it will benefit both you AND everyone else around you.

First need, first claim. Be a river. It works every time.

Has God ever spoken to you about this principle of first need, first claim? Do you have a testimony about how He has provided for you, even though you gave to someone else’s need? If so, please leave a comment below! I’d love to hear your thoughts!