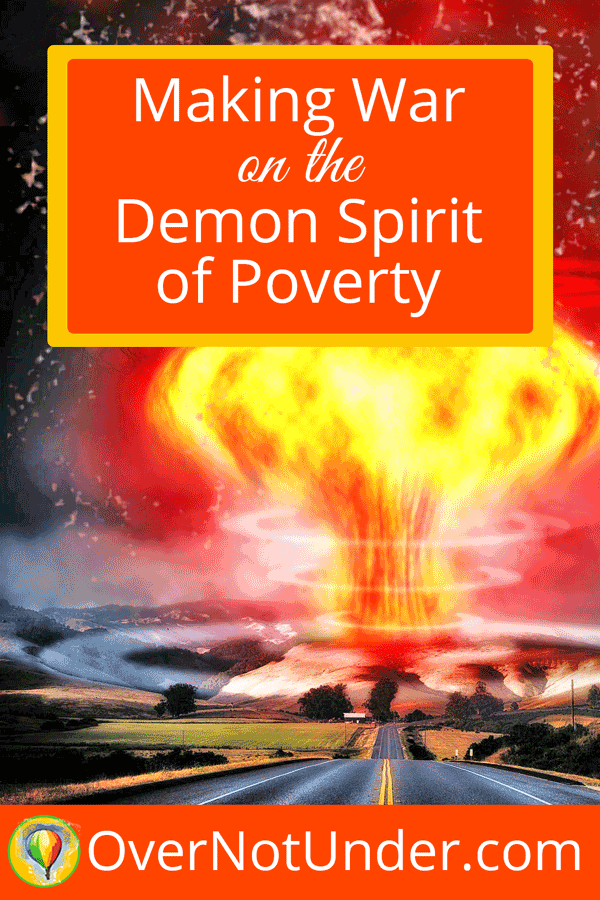 I’m over it. Absolutely over it.

I’m OVER seeing the demon spirit of poverty wreak havoc on God’s people.

The demon of poverty is a liar. It’s a demon, and therefore one of the devil’s minions–and there is no truth in the devil or any of his minions. Jesus told us this in John 8:44, when He said to those who mocked Him and argued with Him:

“You are of your father the devil, and the desires of your father you want to do. He was a murderer from the beginning, and does not stand in the truth, because there is no truth in him. When he speaks a lie, he speaks from his own resources, for he is a liar and the father of it” (John 8:44).

There is no light in the devil. Only darkness. And the devil only comes to steal, kill, and destroy. John 10:10 says:

One of the biggest ways the devil steals, kills, and destroys is through the lies that his spirits of poverty tell to God’s people …

And the people of God eat it up.

It seems to me that the spirit of poverty is one of the church’s most cherished demons. People who listen to and embrace this spirit are all about it. They love what it tells them:

It’s sad. Truly sad. Heartbreaking, even. And I’m fed up with it.

I desire to completely eradicate poverty from the Body of Christ.

Too big a goal, you say? No, it isn’t. God has always used individual people to shift the revelation in His Body into closer alignment with His Word. Look at:

I could go on and on, but I hope that you get the message.

God has always used one willing person to convey the message of His heart for a generation.

Jonathan Edwards, one of my heroes–the famous preacher from the First Great Awakening–said it something like this:

“Resolved, to live my life as if God has chosen one person to change the world in my generation, and I were that one.”

That sentence makes me gasp, then cry, then whisper. Because each of us is that one if we are willing to be … and I am that one when it comes to preaching the Word about the abundance of God.

But like every message, God’s Word is “he who has an ear to hear, let him hear.”

But other people do desire to hear. They choose to hear.

They choose to hear because they examine the pages of Scripture, and what God prescribes therein is clearly seen lacking in their lives. They see Scriptural promises about:

People with ears to hear look at these Scriptures and so many more, compare them to what they see in their own lives, and they see that the two standards are not equal.

And people with ears to hear cry out to God from the depths of their hearts for help.

These people are humble before God. They search the Scriptures. They are willing to let go of their sacred cows in order to bring their lives into the kind of Lordship prescribed in the sacred text.

JESUS. Let us value You, Lord. And everything You say.

And it all starts with humility.

I listened to a teaching the other day about raising the dead. It was by a Christian minister who has actually raised the dead, more than once, and I certainly never have raised any corpses–yet Jesus commanded us to do so–so I wanted to learn what he had to say. And I will tell you, it was tough:

It was tough to listen to this teaching about raising the dead because it challenged all my paradigms.

No, not challenged. It crushed all my paradigms. Broke them. Annihilated them.

As I listened, so many of my expectations and thought patterns got crushed that I thought more than once, “Is this guy a heretic?” My favorite Scripture is Isaiah 8:20, which says:

To the law and to the testimony! If they do not speak according to this word, it is because there is no light in them.”

… and I am really careful about discerning whether anything I hear or read matches God’s Word. REALLY CAREFUL.

So I listened to this guy teach about raising the dead.

And you know what? Every point he made was solid … but it sure rocked me.

And when I say “rocked me,” I mean my spirit came unhinged. Unhinged, but in a good way. The power and anointing on this guy’s message was off the charts. It was the purest, sweetest teaching about Jesus I have ever heard–and it was all about His resurrection power.

But boy, did it ever wreck my paradigm.

Listening to this guy teach about dead-raising and resurrection power rocked my world. I had to let go of some sacred cows that we all have in order to listen to the limitless, boundless love and power that JESUS has.

I’m gonna be honest with you: it was hard. But you know what? This teaching about resurrection power took my faith to a whole new level.

And when people desire to be free from the spirit of poverty so they can walk in Holy Spirit’s abundant provision of wealth, the process is the same:

You have to let Holy Spirit root out and destroy your sacred cows so you can receive truth.

That’s why I say that forsaking poverty and moving into abundance requires humility. Abundance and wealth are the will of God for you … but they require YOU to submit to all of God’s Word, not just the parts you already understand and walk in.

So will you go with me?

Will you let Jesus have your sacred poverty cows, offering your WHOLE self on the altar as a living sacrifice to Him?

Leave a comment below and say yes or no.

With love and many prayers for you in Christ,

Day 2 of exercising ‘til I get my timber frame h

Day 1 of exercising ‘til I get the timber frame

Just a glimpse of a few of our mentoring resources

This is the trilogy of books that I am using each

It’s live!!! GO GET OUR NEW BIBLE PLAN ON YOUVER

Just praying for an overflowing, burning heart for

What’s your favorite lotion or perfume? And do y

NEW RELEASE TODAY: Beloved friend, do you need wo