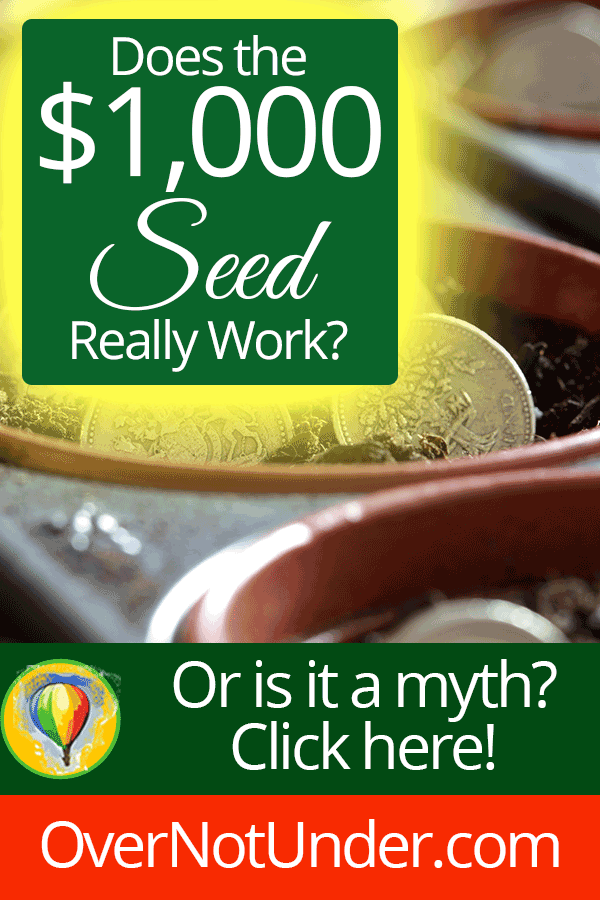 Have you ever heard someone tell you that a certain thing will happen if you sow a thousand-dollar seed offering ($1,000)? If so, have you wondered if the $1,000 seed is “a thing”–if it really works? I have too, so I want to show you what I believe to be the real truth behind the thousand-dollar seed today.

Let me first say that you might be surprised to read the conclusions I draw about the thousand-dollar seed.

I’m not going to make pat charismatic conclusions here, and I’m not going to be a nay-sayer either. However, I do believe that the revelation I have received about this is from the Lord, and I believe I can show you what the Lord has shown me in a way that:

And again, I’m NOT going to say, “You need to sow a thousand-dollar seed now, and it will cure what ails you.”

But, then again, I’m not going to discourage you from that, either. Let’s look at what I believe to be the truth about this teaching in more detail, and you’ll see what I mean pretty quickly.

The power of a thousand-dollar seed ($1,000 offering) is a very popular teaching, especially in charismatic circles.

And I’ve seen it work. I absolutely have.

I have sown thousand-dollar seeds:

The problem is, I’ve also sown thousand-dollar seeds and seen them not work.

In other words, I’ve sown thousand-dollar seeds and seen nothing come of it except that I had a $1,000 less.

What makes the difference? Several things:

First, let me say that the ground into which you sow ANY offering is of critical importance. I’ve sown into ground where I couldn’t thrive, and my seed didn’t thrive either. And if you would like to know exactly how to determine if a ministry you’re sowing into is good ground or not, read my article about that here.

EVERY time I’ve sown $1,000 seed into good ground, it has brought the breakthrough I was praying for. But every time I haven’t seen results, the $1,000 seed was sown into bad ground. So the ground you sow into is very important.

Secondly, it absolutely DOES make a difference how you sow.

Are you sowing your thousand-dollar offering in faith? Or, are you being manipulated to sow $1,000?

Nothing that is birthed in manipulation can ever bear good fruit. Looking back, the times when I’ve sown $1,000 and it didn’t bear fruit, not only were those offerings sown into what I consider to be bad ground–but I was manipulated into giving those offerings.

On the other hand, the $1,000 seed offerings I’ve sown into good ground–ground where I WASN’T being manipulated into sowing the seeds–brought forth good fruit.

That leads us to the biggest issue of all:

Is the thousand-dollar seed really a God-idea? Or is it something man came up with to get $1,000?

Well, yes, it’s a God-idea … but yes, it can also be something that man came up with. It all depends.

Ask yourself this question:

If a $1,000 seed offering is a thing, what happens to people who don’t deal in the US dollar?

Think about it. The US dollar is not in the Bible, and yet people say that a $1,000 ⇒DOLLAR⇐ offering will break the back of the devil. Which, again, I have seen work every time I have sown that $1,000 into good ground. Every time, without fail.

But what about people whose currency is the rand, yen, won, baht, peso, Canadian dollar, shekel, Euro, GBP, or rupee?

The valuations of those currencies are all over the place. Some are worth more than the US dollar, and some are worth closer to a US cent (1/100th of a dollar). What about those people? If the value of the seed is what breaks the devil’s back, do all of those people need to go out and get US dollars in order to sow?

Based on current exchange rates as of September 20, 2019 when I first began writing this:

The US dollar is not in the Bible; but when you look at the value of various currencies, it becomes obvious that the key to using a $1,000 seed to break the back of the devil CANNOT BE in the actual, monetary value of the seed.

I say this because there’s no special spiritual law for citizens of the United States of America.

If a spiritual principle is true, it’s going to work the same for people in every country around the world. And if you saw an evangelist in Japan preaching the equivalent, Japanese principle of the thousand-dollar seed, he or she would be encouraging you to sow 1,000 yen, right?

Similarly, if you saw an evangelist in Israel encouraging you to sow a thousand of something, they would be asking for 1,000 Israeli New Shekels, right?

And if you hear a British evangelist in London asking for a thousand-fold seed offering, they’d ask for Great British pounds … wouldn’t they?

If the value of the seed is different all over the place, from country to country …

… But the principle works …

… Then the difference-making, breakthrough-bringing factor here cannot be the value of the seed. (It cannot be the actual 1,000 dollars.)

There must be a PRINCIPLE behind the whole thing … and it must be that principle that breaks the back of the devil.

Want to know what the principle behind it all is, so we can all be freed from legalism today?

Here’s the principle behind the teaching of the thousand-dollar seed:

When God gives a word, a blessing, or a promise, you have to respond to it. And in Deuteronomy 1:11, the Lord gave us an astounding, mic-dropping, bowl-you-over word that will mess you up if you let it:

“May the Lord God of your fathers make you a thousand times more numerous than you are, and bless you as He has promised you!” (Deuteronomy 1:11).

This verse was spoken by Moses. He was pronouncing a blessing over the children of Israel before they went to cross over the Jordan into the Promised Land. And since God is no respecter of persons, we know that that blessing is His will for us too.

When God gives a word, you have to respond to it.

You have to respond in faith and demonstrate your faith. Faith without works is dead.

So why does it work for people to give a thousand-dollar seed offering? Because,, invariably, their seed is tied to this promise; and when they give, their sowing demonstrates to God that they BELIEVE this promise–and that they believe that what He did for another, He’ll do for them too.

It’s the FAITH, demonstrated by the RESPONSE to the promise, that works … not a magic number of 1,000 US dollars.

So what is the principle behind the thousand-dollar seed offering? Simply this: The number “1,000” is simply a number you can hang your hat on to show the Lord:

And when you get that kind of faith–faith that gives sacrificially because you know He can’t NOT do it–YES, you’re going to get results. And when you sow with that kind of faith into good ground, you’re going to get results every time. Not because of the value of your 1,000 rupees … but because of your faith, combined with your works, and planted into the promises of God.

Now let’s take this a little further and get really wild with it.

If it’s not the 1,000 US dollars that makes the difference (because, presumably, 1,000 pesos would also work if you’re in Mexico and dealing with pesos) …

Wouldn’t sowing 1,000 of anything have the same impact?

Couldn’t you attach your faith, evidenced by your works, to an offering of, say, 1,000 US CENTS (or rupees or pesos or won or yen) and see a breakthrough just as big?

And that’s why I call it a “thousandfold offering,” most of the time, not a “thousand-dollar seed” …

… because I’ve seen huge breakthroughs by sowing 1,000 cents, which equals $10 US dollars.

Why? Again, because I’m sowing a thousand of something to show the Lord that I believe Him for a thousand-fold harvest–and THAT I BELIEVE HE WILL DO WHAT HE HAS PROMISED ME.

Now, this is not an excuse to be cheap.

I firmly believe that sacrifice is also a big key to demonstrating your faith; and God always rewards sacrifice. If you give an offering to the Lord that costs you nothing, it will is not going to move God anywhere near like a sacrificial offering moves the heart of God.

The actual offering you give is between you and the Lord. And if the Lord has blessed you such that you CAN give $1,000 (as an American), or whatever large amount, then do it. Make whatever sacrifice is within your reach to make. Always give your best to the Lord.

I believe the breakthrough works the same, and I believe you will experience the same thing.

Try it and see. Sow a thousandfold offering today–even if that is $10, equaling 1,000 cents–and put the Lord’s faithfulness on display as you watch Him react to your faith. Ask Him to bless you a thousand times–and do what He has promised you.

Does this help you cut through the superstition and mystery about the thousandfold seed offering? Please leave a comment below!

Previous Post: « Are You Sowing Into Good Ground? 3 Ways to Know
Next Post: Prayer for Money to Do Every Good Work »